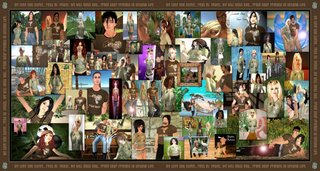 here is the finished collage that was made from the photos that different SL residents sent in after taking their pics in the "steve irwin" tshirts. the shirts were sold for donations from 100L to 10,000L and most people bought the 100L ones, and from all the sales, there was at last tally, over $400.00 (usd) raised for steve's "wildlife warrior" foundation. i was so touched by the im's i got from hundreds of you, and also by the creativity of the photos sent in. in this collage, there is everyone from fallingwater cellardoor, to anshe chung, and everyone in between... i love how it is comprised of a pretty well rounded representation of SL residents... from "famous" business people to cute "furries" and even "feri" the punk rock "oi boy!" ;) i'll be pulling the final kiosks out there this week, and sending in the money to "wildlife warriors"... remember steve's family in your thoughts and prayers, the hard time is just begining for them as the "hype" dies down and they go through life day to day with out him. thanks again to all who gave, sent photos and participated in celebrating this life. xoxo, caLLie