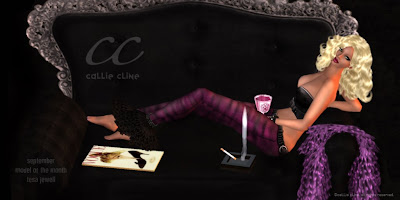 congratulations to tesa jewell, a caL gaL who was chosen as the caLLie cline model-of-the-month for september. tessa is wearing caLLie's new eyes, her new rebel rebel pants in the "pinks" and the "swan song" top with a fat belt over it.

it was a honor to work with tesa, she was a real pro and though she's not done a lot of modeling, i think she has great promise as a model.

we had a blast doing the shoot, and she's just a great girl!

here's the photo that appears in the BEST OF SL magazine and in my shop!!! yay!! look for the rebel rebel pants to be released this week!

thanks tesa, you were a real pleasure to work with!!!

p.s. model of the month entries for october are being taken now! kiosk in caLLiefornia!!!
Posted by caLLie cLine at 2:28:00 PM