a fun modeling job in a RL magazine!!!

gosh i'm so excited to share all this i don't know where to even start. since i tend to be long winded, i'll just try and get to the point!!!

this photo appears in the new maxim magazine, about 3 pages in, and it's a double page spread... ok so why am i excited? 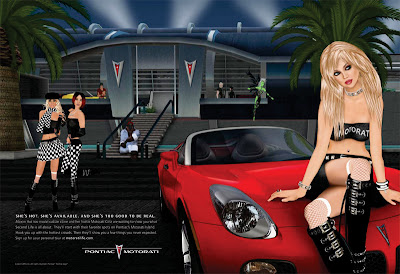 • I GOT TO TAKE THE PHOTO!!! which was no easy task... but a fun challenge to deliver their vision for the virtual dealership and it a lot of fun and experimentation.
• I GOT TO ASK MY FRIENDS TO BE IN IT!!! which was not easy either, but fun!
• I LEARNED A LOTTTTTTTTTTTTTTTTTT ABOUT TAKING PICS IN SL
• IT'S IN A REAL LIFE MAGAZINE!!! omg!!!
• I GOT TO BE THE MODEL ON THE CAR!!! hehe
• I GOT TO COLLABORATE WITH SOME AMAZINGLY TALENTED PPL
• WE ALL HAD A BLAST AND HAVE BEEN WAITING TO SEE THIS IN PRINT!
ok i'll drink my decaf now and say, this is cool because i never thought i'd get the honor of working with the amazing folks who run pontiac's motorati island and when i started with my 'motorati' girls venture months ago, i never dreamed it would lead to these sorts of things. it's rewarding in a lot of ways, from caLLie doing more modeling, to being able as a graphic artist, stretch my skill set in this whole new crazy world we call SL. it's really been fun.

i know there has been much controversy about BIG BIZ coming into SL, but i have the utmost respect for the WAY pontiac has done it, and what is that? letting the "community" build it... and if you have NOT visitied, it's a great place to explore, race cars, dance, ride go carts and even more!!! but more on that later ;)

ok so, i want to take this time to credit everyone who worked so hard to make this photo happen and what we're wearing of course!!!

ok in the front we have "mOtOrati girL" & designer and my SL sister, kiana dulce in a "motorati girls" outfit, made by me, except for the skirt that ki made, (cute ki!) and she's also wearing GurL 6 hair, "paige", hybid 2 skin, caLLie cLine signature boots, and the very cool artielleri racing bracelets... i think that's all! (oh and socks by image reflections! mine she borrowed, hehe)

next to her is, "mOtOrati girL" and ASpiRE! CEO, bianca darling in a "motorati girls" outfit, by me, hybrid 2 skin, custom made "motorati necklace" by elexor matador, calla narcissis hair, and cc signature boots.

moving over to the right we have feri beckenbaurer and his friend and i have no clue what they are wearing but they look cool! (i'm sure feri is wearing his famous "oi" boots) haha

then in the air, my friend 'in kenzo' in her crazy green flying outfit, i have no clue who made it! (she probably did!)

oh the boy on the steps is "grease monkey" he's an avatar you can choose on the motorati sim, hehe, it's me under there tho, but don't tell, hahaha

ok that leaves my photo! i'm wearing a custom hybrid 2 skin by santana lumiere of nevermore studios, and my GurL 6 "STAR" hair in a darker color than in the "hot 100" photo, caLLie cLine signature jewelry, a "motorati" tube top, my signature boots, and a cool belt from a place i can't remember :( as well as an old lollypop black skirt by tuli asturias, and my favorite socks from image reflections, i think my belly ring is the xoxo set from elexor matador, and my earrings are from my signature line too. oh i have on custom eyes i made and lynnix lashes!

im sitting on the pontiac solstic GXP car, and it's a great car in RL and SL, in SL it is color changeable and sells for like 600L, in RL it's FASTER than a porsche boxter! (something i recently learned!)

well anyway, the tours started yesterday and were a lot of fun! some caL gaLs joined the 6pm tours and we had a blast but i'll do a seperate tour post.

thanks again to everyone, i had so much fun on this little project and i hope do many more...

you can find out more about the tours on www.motoratilife.com they even made me a lil web portal thingy ma bob, it's funny....

ok, well hope to see you all on a tour! but i'll write more about those later cuz i've written quite a bit already.

"She's hot. She's available. And she's too good to be real."
I am just dying on your behalf---in a good way, of course. Yay! And what a gorgeous photo--great composition--really really pulls you in.

So, congratulations!! You worked hard and it shows :-)

('In Kenzo' is such a wonderfully surreal element. She makes me think of Kylie Minogue as the absinthe green fairy from Moulin Rouge. I love that this is in a RL mag and so many non SL-ers are going to be perusing this, then suddenly seeing Kenzo or the monkey and saying, huh?)

ok for the record i just want to say, i did NOT write the text. lol... it's in the "maxim" lingo sorta thing... i'm just happy to be able to model and stuff... and it's cool to be in this with my sissy ki and bianca who are "hottie motorati girls" hahhaha

and i am "available" to say hello on the tours!!! hahaha, funny.

i'm glad you like the photo, i do too, i love seeing 'in" and the girls and the ppl in the dealership, makes me wanna go there!

ok thanks for the nice comment... yes "in" is surreal!

But... are those real SL hands? I really never see things looking this good on my screen. :(

Cool... If you ever need another of Motorati's top movers and shakers for modelling, give me a yell ;)

they ARE sl hands, but as you can easily see, the photo did have hours and hours and hours of touch up work to smooth out those square edges on our avatars, and add lighting shadows and other stuff that is not quite right in SL...

but yes the hands are real, i added a shadow under them, and i think smoothed out the ends of a few fingers, and stuff like that...

they do look pretty!!! lol, i never really noticed before...

after i did all the post work on the photo, the professional team at the agency i worked with went in and added even more touches that really made the car come to life, and when i saw it i was like "wow"... they did the cool thing with the sky too...

Congratulations! The phto is hot and so are you. /hugs

Looks great! Congrats! Dangit why am I not in there??????? Oh wait I was hiding behind the car cause I was having a bad hair day! =P