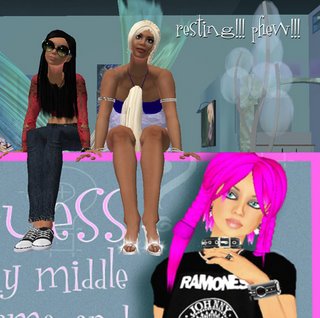 YAY, after a few days of TONS of guesses by • fuNky caL gaLs • on what my middle name was, i gave a HINT last night because sadly no one was even close... well perhaps one person was a lil close... i mean guessing a name with a "c" is hard enough... so a hint was in order... after giving the hint... (ends with an Y, has 2 vowels) the "caL gaLs" were sending in notecards at an alarming fast rate, and the first one contained the right name!!! CASSIDY!!! yes, so CASSIDY is caLLie's middle name... hehe... does that mean anything???? well it might in the future ;) 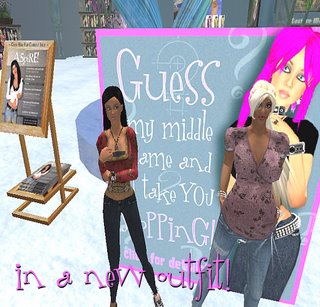 k, so our first stop was to "mischief" cuz aleathia wanted some jean outfits! so off we went... she got a few things, and wow, what a great collection of stuff!!! whoo hoo, janie! so then it was off to the new "shine" for more "jean" things... (a nice dress there and some cute pinup girl jeans) and i think "al" even bought a lovely gown there :) yay! then it was "hair" time and she knew exactly what she wanted!!!! so off to cake! 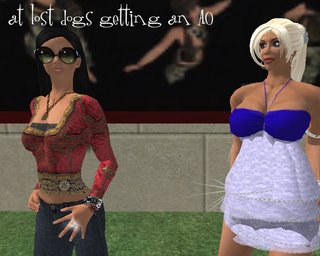 she tried on some demos, we had a laugh, and she got the hair she wanted!!! yay!!! btw, she's "with child" and the baby was so active during our liltte spree... i think we have a future shopper :) 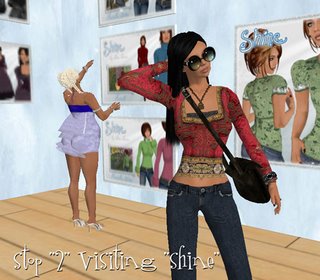 after the hair... she HAD to have an AO, so... after little thought, hehe, we rushed over to lost dogs to snatch up a DNA hud AO thingy me bob. and yay! it worked! i have one too, but have never loaded up my stuff in it :( but i do like it mucho. 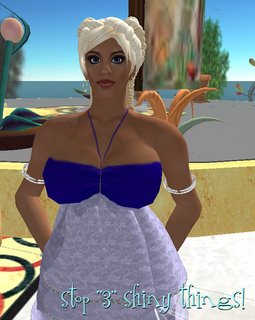 and after that... i think we went back to my shop, and took a pic, and chit chatted... now these pics didn't come out in the right order... and we hit a few more places, like shiny things... and i can't remember where else, but i had a great time... aleathia you are a GREAT gal, and i'm really happy to have gotten to spend time shopping with you!!!

(the prize was to shop ANYWHERE, not just my store, and it was AWESOME!!!)

to everyone who entered, ty so much, i wish i was richer so i could have taken you all on a 3k shopping spree it was so much fun.

Awww.... there goes my fiendish plan to auction off your middle name to the highest bidder...