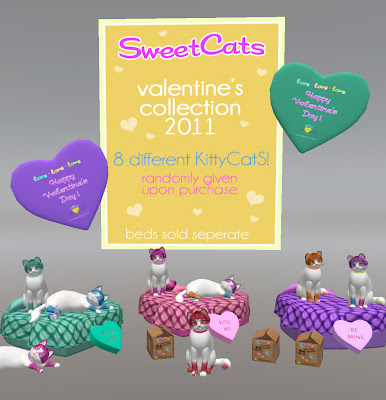 To celebrate LOVE we've made a collection of KittyCatS!

There are 8 different cats in the collection and they come with matching collars & and LOVE5 vitamin drink. (love booster)

they went on sale on saturday and will be on sale til next saturday. they are also transferable!


you can view them here 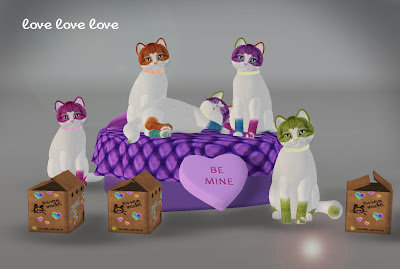 barnesworth anubis made the matching beds which can be modded. yay barnes!

btw, you can hold the KittyCatS! too ;)

happy valentine's day and may your week be filled with LOVE!

a few years ago i started working on a little project making little cats that my customers would be able to carry in purses or use as fashion accessories. when the whole maxim/pontiac thing happened that project, was put on the shelf. when i began designing i had a cat in each of my little stores that walked around and bumped into my customers. i've always loved them and own about 8 different kinds of SL cats. (non breeding ones)


in RL my first pet was a cat. a grey persian my parents bought me for my one year old birthday. susie was her name. i don't remember her at all now, (she sadly got ran over when i was very young). but my whole life growing up i always had a cat of my very own. i grew up on a "farm" not a real farm but for southern california, 5 acres with pigs, horses, sheep, cows, ducks, peacocks, chickens, a goat (yes i had to milk it before school) and horses and more i guess can qualify for a farm of sorts. i collected eggs also before school... i didn't like the milking and egg collecting so much, but the horses and my cats always. we also raised dogs. english springer spaniels, german shepherds, doberman pinschers and... staffordshire terriers (yes, pit bulls). it was always fun to have little puppies running around and stuff. but nothing every took the place of my kitties to me. (ok well my pet raccoon did when it was a baby before it bit me)


fast forward to now...  early this week, KittyCatS! was launched.  it's a project i've been working on for quite a while with 2 people i met in SL who are also cat lovers. Equniox Pinion & Dennis Lagan. We've created a pet KittyCat that can breed, and play and cuddle and interact and it's been quite an adventure to say the very least. (they come in 5 types to start and can be bred where a LOT of different kinds of cats will be discovered. they can also but turned into pets which require no food and don't breed but just are nice pets who love you.)

this project though challenged me as an artist in a lot of ways, mostly learning to paint in a 3d program. YIKES! i'm still learning and have a LONG way to go, but it's been fun too. (my main job was making the cats and the visuals, and all kind of stuff)

sometimes i wonder if all of us in SL are a little bit crazy, and i surely thought i was many times during this project. fighting sculpties was NOOOO fun. thankfully some awesome people we there to help me on that part of the project, Gospel Voom, Maxwell Graf and Anthonys Repbulic were invaluable in their input and encouragement and willingness to offer tips and support. awesome people!

anyway... lest i go on and on... if you'd like to see our little KittyCatS! you can get a peak at them on our sim... named simply KittyCatS . you'll find them walking around, chasing butterflies, sleeping, running, washing their faces, lying around and more. our store was built by my longtime great friend barnesworth anubis who has stuck with me in my first venture into the SL animal world when we started making posh chicken housing... and boy what a wild ride it's been. he's created some outstanding stuff for the KittyCatS and it's available in the store as well.

in closing this post, i'd just like to thank a few people who's support really was so so appreciated personally by me. words really can't say how thankful i am to them. well first to equinox and dennis, thanks for everything and most of all being committed to excellence and hard work. i'm amazed by both of you in more ways than i can express. jaz zephyr & moondoggy, harper beresford, meara deschanel, sexypandora bailey, bho, barnes, stroker serpentine, tab scott, gospel, maxwell, anthony, night singh, and also jon, who i worked with on the sculpts. he wouldn't dare come into secondlife, but i'm gonna try to get him to read this post! (hi jon!) (we worked together on RL projects i've done) there are a lot of other people who gave me a lot of support during this time so if i have forgotten anyone... please forgive me!

well that's my little cat tale for now... it's a story i hope will continue on for some time.

i've missed blogging and will hopefully do more soon!


p.s. there is a cute little movie chantal harvey made where you can see a bit of the cats in action.