we had a GREAT time at the "rock-n-fashion" event friday night. it was awesome to see so many people come in "early punk" outfits and dance while Shane Hornet took us on a musical and historical journey of the birth of punk rock, adding some great historic sound clips from the early scene in NYC.

here's a little photo/collage that is a snapshot of the evening... 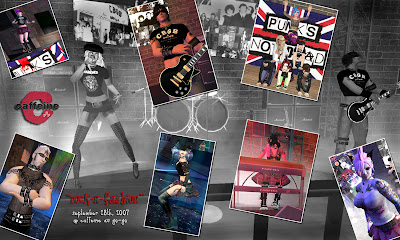 it was great to see so many diverse people come out and everyone seemed to have a blast... we even had a few "all star jams" on stage, and it was funny to see people let loose, have fun and even stage dive.

thanks to everyone who came and to celebrity for being a great hostess, and shane for the AWESOME music and all who's presence made the night one i won't forget for a LONG time!

a few fun things for halloween, as you get ready to decorate... and wear stuff!

some colorable lights and "beans" for your enjoyment!!! sculptie prim "beans" come in 4 poses, 98L each... colorable... (more styles inside ::home:: store. 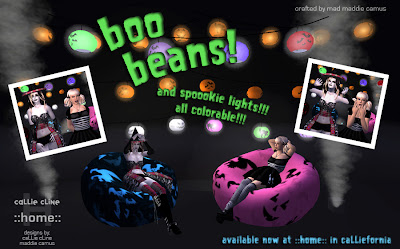 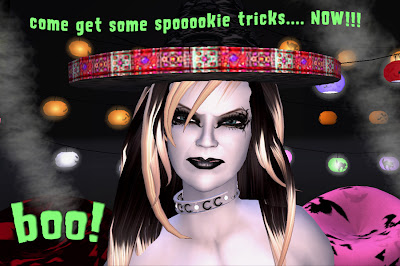 witchy baby, an outfit you can wear anytime if you lose the hat, comes with gloves, hotpants, skirt, top, hat, stockings and cauldron purse... 199L 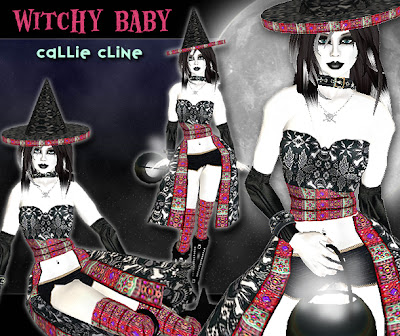 AVAILABLE BETWEEN MY MAIN SHOP AND HOME STORE, SEE MY PICS FOR LOCATIONS!!!
Posted by caLLie cLine at 1:31:00 PM

our first "rock-n-fashion" event was a blast.... this one promises to probably be a little crazier, more wild and fun.

the "hostess with THE mostest" celebrity trollop will be YOUR host for the evening as we celebrate early punk rock fashion AND music...

what could be better than mixing music and fashion? 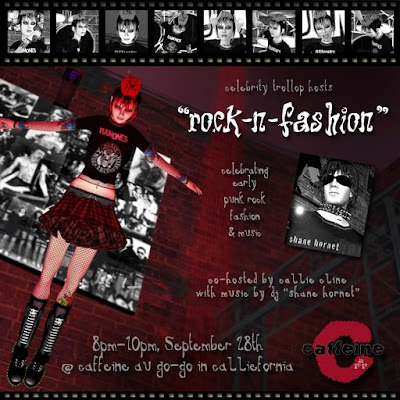 we'll start at 8pm and go until around 10 or longer for those of you who just can't get enough!!!

so start looking for your fave early punk gear, and get ready to party to the sounds of the ramones, blondie, iggy pop, and more... dj "shane hornet" has prepared a fantastic list including some RL sound clips from when punk was being birthed in NYC... it's gonna be fun and we can't wait to see you all there!!!

we've got more fun "rock-n-fashion" events planned hosted by some of the coolest people in SL, and well as some "jazz-n-fashion", and other fun events tying music and fashion.

there will be collectible gifts given out ONLY at the night of the event!!! starting with the very first ever "rock-n-fashion" coffee cup with ms. trollop on it!!! after all, it is "caffeine au go-go"

can't wait to see you there!!

i'm so excited about this new set. it's a "menu driven" set which means, there are multiple poses male and female, and some fit both, so you're not stuck with just one pose. 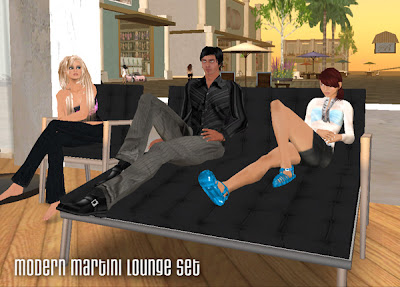 you can see in these photos below the various poses!!! and colors, comes in red, black and white that is TINTABLE, so you can make your own custom color!!! 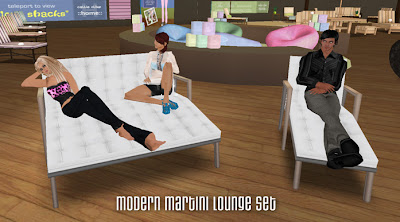 come see these and more at the ::home:: store in caLLiefornia, right to the left of my main shop (top of my picks)

the sets are affordable, stylish, mod and fun!!! 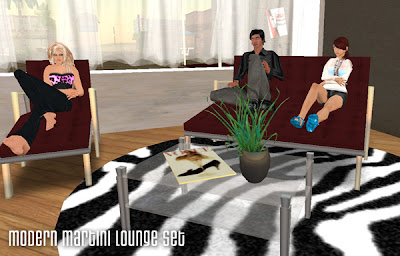 the "love beans" have been a fun addition, and more "beans" coming soon!!! look for "wild beans", "boo beans", "cool beans" and even a "3 bean salad" soon! (we're growing beans like mad! or should i say like mad maddie???)

ok i gave in

i have no clue what this means, but after lots of ppl telling me to take this test i did...

are there any dork tests???

reflections... the generosity of some blows me away.

as summer is ending, i've been reflecting on RL, SL, and the goodness found in both...

i just wanted to say, i was incredibily touched by the efforts of some amazing SL folks who hosted an event, not to raise money, not to attact attention or traffic, or anything but for one purpose..

to lift the spirits and support a dear friend of their's "kimber" who was lying in a hospital in scotland, and who due to fighting a deadly disease of cancer, could not be in SL much, nor participate in RL for that matter.

i was invited to just "come" to the event, to show support, and it turned into a bit more, which i won't go into, but i will say, thank you to justine babii, celebrity trollop, and all my cal gals who came to part of the event and gave their support to this young gal.

this is what excites me most about SL... and RL... using those lives to touch other ppl.

this was exceptional because again, it was not about raising money, traffic, or anything... just a way to let kimber know she is loved and cared for.

(she had a computer at the hospital for the duration of the event, tho she slept most of the time)

i don't even have a photo to post, it doesn't seem appropriate as this event was just for her, but we all had a fun time, and again, thanks to everyone who was involved, and who coordinated this. i could not have been more proud to be a citizen of SL than on that night.

god bless you all.

just wanted to share that there is a very cool contest for 2 spots in a RL and VERY COOL SL calendar!!!

you can learn more by going to my sim, "caLLiefornia" in my main shop, and clicking on the kiosks for more info.

2 girls will be chosen from every entry received by SL residents!!! it's a very very cool contest, great ppl, and how cool would it be to see YOUR face on a RL calendar???

there are kiosks in my main shop and on aspire isle, and other places in SL...

the booths are SO cute and LOADED with poses, but you dno' thave to take your photo in the booth, just read the instructions by clicking on the booth and follow them!!!

best of luck and EVERY entry will be voted on!!!!

good luck you beauties out there!!! 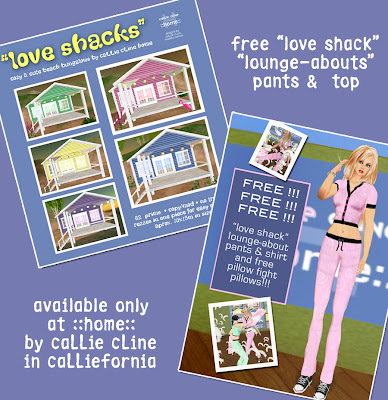 to celebrate the opening of the now fully set up home store
we're giving away pink "lounge-abouts" (pants and top)
that come with a fun pillows that you can have a fun pillow fight with!!!

maddie and i have been working hard and fighting fun! join us!

available at ::home:: by caLLie cLine in caLLiefornia, just to the right of my main shop...

stop by, check out our multiple pose and animated furniture and our new "love beans" 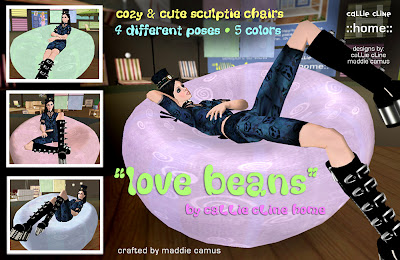