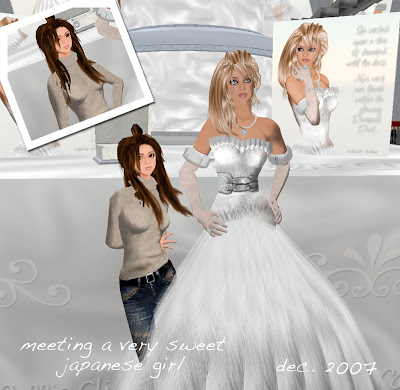 one of my greatest joys in SL is meeting customers from all over the world... i'm constantly amazed by the different ways people express themselves via their avatars. be they a cute neko, fairy princess, elf, fairie, space fighter, or high fashionista, the unique ways of visual expression are always fun to see.

this sweet girl and i had a nice visit last week. i loved her cute face and simple way of dressing. we had a nice talk (thank you babbler) and took some photos... i just love her sweet little face and sorta messy pulled back hair. she was delightful to speak with and simple things like these moments are much of the reason i do what i do... moments like these are free, priceless and quite wonderful. 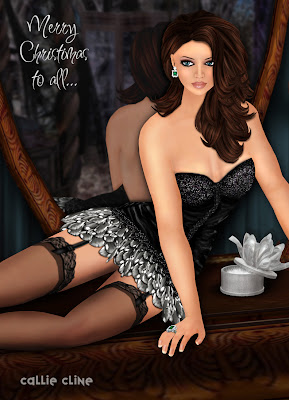 just a little note to you all. i know this time of year is filled with great joy, and also great sadness. not all of us experience the "holly jolly" good feelings, and for those of us who may, somewhere there is some sadness in the most wonderful of days... those who are no longer with us, those who come to our gatherings that annoy us, (hehe), and the normal ups and downs of life... things we wish were different, regrets, or perhaps seeing someone close to us go through a hard time. so while i wish "joy to the world" i realize not all can just say, 'oh gee, thanks! happy happy, joy joy'.... so in my little musings i want to say...

in any language the wish is the same...
have a day filled with love and joy...
may we all reflect and be thankful
for the great blessings we share

for in the storms of life,
there is always something,
somewhere, someone,
to be thankful for...
may we see those things
each day... today... 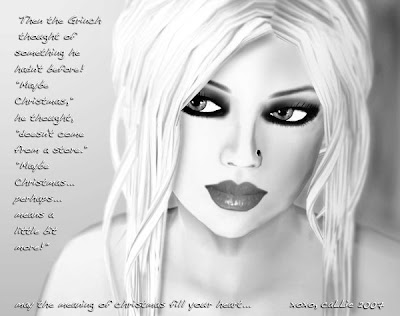 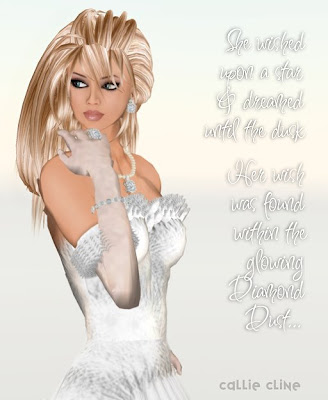 it's finally out, and group got their notice just a bit ago...


the "Diamond Dust" Limited Edition boxed set comes with a lovely set of jewels in a chest by sue stonebender, the jewelry chest is scripted and a limited edition and actually is a storage chest... the dress also comes with the classic EVA diamond pumps by L&E (lassitude and ennui) and amazing shoes by ZHAO, limited Diamond Dust shoes... (created by Melanie Zhao) 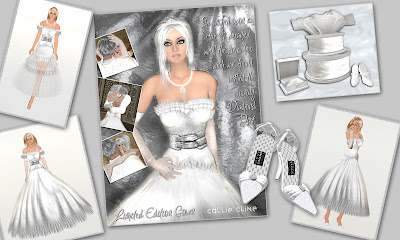 it can be worn many ways... this dress inspired me to write a little poem as it sorta had a story behind it, of a young girl who dreamt of a kind prince by day who came to her at night, bearing a chest of the most perfect diamonds & precious pearls ever found... but, his true love was her dream and the real gift...

for purchase in my main shop, display in center where you can see the jewels and shoes, and in back the boxed gown, 85 total, and on the back wall, large photos of the gown in many variations.

"ugly duckling" and "fly away" 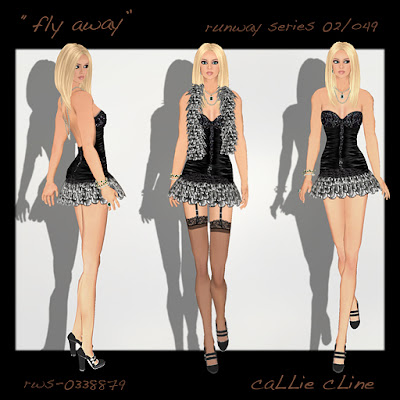 fly away was worn in the photo for the 12 avatar calendar (top of my blog) and "ugly duckling" comes with a full length shirt as well. 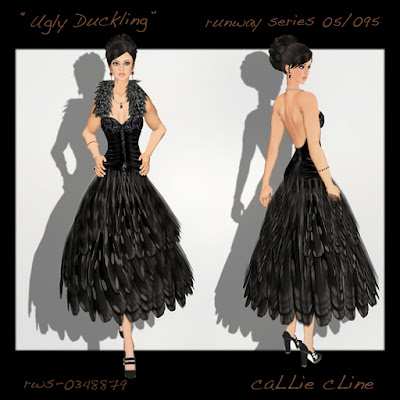 in my shop on the left when you walk in, check out the beautiful jewelry vendor full of new goodies by sue stonebender, who's jewelry i am wearing with both dresses.

wearing also "clover" shoes by zhao shoes! i love these!!!! (melanie zhao makes them and other pretty shoes!)

more to come this week, including persephone in seasonal colors (deep red, emerald, sapphire) by request, and the "diamond dust" limited edition gown.

i have so much to release, but some RL things have set me back a bit... so i'll try to get them out bit by bit this week. (my limited edition gown is about packed up to go as well, i love it and it comes with the most AMAZING jewelry and collectors jewelry box by Sue Stonebender... watch for that soon, only 80 or 85 will be sold)

this dress i named after my grampa whom i always miss this time of year. it's not really "wintery" but it is in ice cream flavors... his favorite, pistachio, strawberry and vanilla... he was italian, and when ever he saw me he'd grab my face and kiss it and say, "bella, bella, bella...." (he was italian) and that means pretty ;) 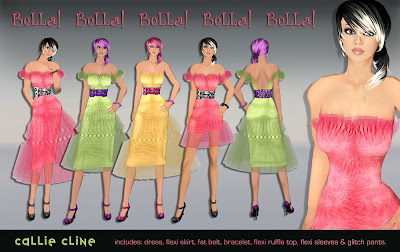 in my main store in caLLiefornia, top of my pics, also lots of freebies in the tree.... and around. 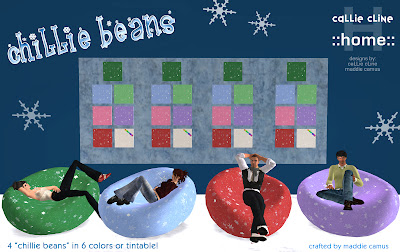 more beans!!! this time chillie beans!!! perfect all winter long to keep you warm... nice and comfy and NO nasty side effects!

in 6 colors OR tintable for so you can make them any color you want.

in front of my main shop near the christmas tree lot, where you'll find other holiday goodies!!!

p.s.s. ty to the crazy customers who so kindly posed with me for this photo.
Posted by caLLie cLine at 8:34:00 AM

i've been tagged like 25 times.... but i'm only doing this once more, hahaha. it's been fun to actually read other people's things...

1. i am a TOTAL beatles freak, fan, lover... i can't believe the amazing depth, creativity, fun, sillyness, and everything they poured into their music. early beatles i'm not as fond of as the later stuff, abbey road being probably my most favorite... tonight i heard "hey jude" in a whole new way, what a song full of wisdom, and wow, just never heard it that way. my life long dream was to write a song with paul mc cartney. i almost met him when i got taken back stage like 2 years ago for taking photos at the concert, but i didn't, :( i met his very nice road manager though.

2. most people i know consider me very lucky. like i've won a lot of contests, and stuff like that. once i won a chance from a radio station to be one of 98 people to pick a key out of a jar one of which opened the doors to a black porsche. i was number 97, so i never thought i had a chance to win... i was right NUMBER 96 WON!!!! i was shaking as i stood there being one of the last 3.

3. i love the taste of your arm after being at the beach all day, and then, like licking it, and tasting the salt. (i know it's weird, but i accidently did it one time and it was cool)

4. i used to pick up hitchikers or people who's cars broke down when i was a young girl, even if they were men, i felt i needed to help ppl... boy was i stupid, luckily, i never had anything bad happen.

5. i'm sorta witty at times, and lively, and energetic... like at family things, but after a bit, i MUST be alone and quiet, too much stimulation is overwhelming sometimes for me.

6. my senses are very sharp. this is a blessing and a curse.

7. i can play a bit of piano, guitar, bass, drums, keyboards, and enough to compose on and produce and enough to annoy "real" musicians.

8. i once owned a ford falcon convertible 1963, i named her ruby, she was white with red interior. i loved that car... and wish i still had it. 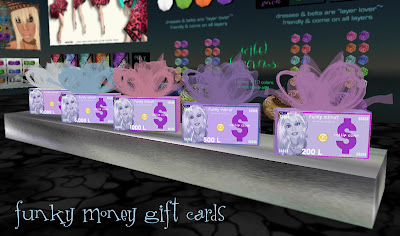 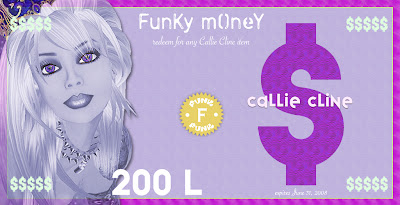 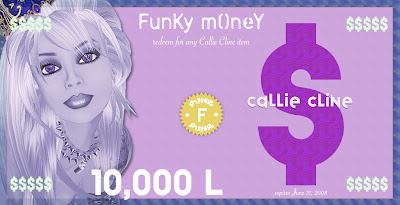 ya someone got me yesterday... so here goes:

Here are the rules:

(1) Each player starts with eight random facts/habits about themselves.
(2) People who are tagged need to write a post on their own blog (about their eight things) and post these rules.
(3) At the end of your blog, you need to choose eight people to get tagged and list their names.(4) Don’t forget to leave them a comment telling them they’re tagged, and to read your blog.

2. my eyes were crystal clear blue as a child and turned crystal green when i was about 9.

3. i used to ride my horse standing up when i was a kid.... taught my pony tricks and was a tomboy for sure.

4. i used to surf and play beach volleyball everyday.

5. though not formally trained in art or music, i have made my living at both since about 21. (well i did have some piano lessons and college art but found both boring.)

6. i'm amazed when i cut open a piece of fruit or a veggie and look closely at the creativity and beauty and just how everything is put together, same with looking at a leaf, orchid, or any thing in nature, it's fascinating to me and nothing has ever come close as far as man's creations to me. (try an apple or kiwi or cucumber to see what i mean)

8. i've travelled to a lot of places, and done many crazy things in my travels, and can't believe i'm alive.... oh and i climbed mt. fuji in japan!!! and made it to the top on my birthday one year.... 11 hours up, 3 hours down. (you basically slide down on lava rock) and collect sea glass from all my travels which i have displayed in little dishes, cups, saucers, etc all over my house.

my cafe press store is open, but NOT done!!! 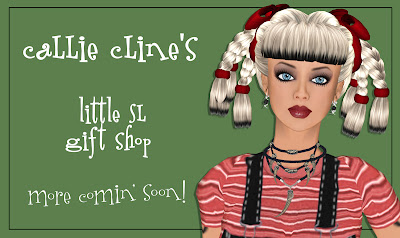 oh wow... what a job!!! i'm so so so sad that after spending almost a month on getting my little cafe press shop up and running... i lost almost everything i put up and had to start over!

IMPORTANT.... UNTIL I CAN GET IT ALL WORKING AGAIN, LOOK ON THE LEFT SIDE BAR WHEN YOU GO TO MY SHOP FOR MORE PRODUCTS THAT ARE NOT ON THE HOME PAGE....

anyway for those of you who knew about this little side project, SOME of it is up now... i'll keep working on more stuff... and doing it all AGAIN!!!

for now, here's a few things, most NOT caLLie branded stuff, which may make some of you happy!!!

some fun stuff tho, my fave being the /1 hide and /1 show stuff, hahaha. (i have some other GREAT sl sayings to upload again done in some diff art i created...

anyway, hope it's in time for some of your RL shopping for SL friends. you CAN buy gift certificates in order to insure privacy, etc.

will get more stuff up all week!!!!