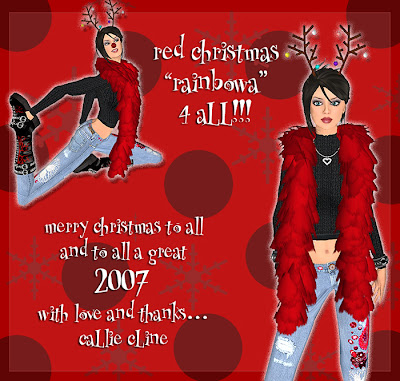 many thanks to friends old and new, you've made my year happy and blue, i write silly poems when i make some posts, and this is one dumbest from coast to coasts, but i'll post in anyway, cuz i want to say, i hope you have a happy holiday, spread the love to everyone you know, and even the poor stranger standing in the snow, i love that this poem is so bad and poor, with rhyming for rhymes' sake, and that i abhor, but i'll do it anyway just to let you know, i'm giving out free "bowas", my store has em' so GO!!! xoxoxo, caLLie p.s. in Plush Lambda... but not for LONG!!! caLLiefornia, here we come!!! (ok, so i'm a dork in a silly mood!!!)
Posted by caLLie cLine at 2:18:00 PM 2 comments 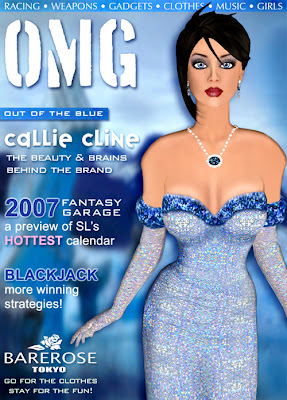 yes!!! it finally happenend! my very first magazine cover and wow, how exciting. i so enjoyed working with korbin king, editor of OMG magazine and was really exited to be asked to be on the december cover, way back in october!

it's a cool magazine for men and women, but mostly men, and has a great fashion section. i'm interviewed inside too, and there are some cool pictures in the spread (8 pages) hey, that's the same that was in Aspire!

anyway, can't wait for you all to see it, and wanted to give you the sneak peak first!

i comes out later today or tomorrow, and features my limited edition gown (sans boa) on the cover.

it's FUN to be an official "cover girL" yay!

thanks korbin for the opportunity and i hope you all enjoy the article and the magazine.

P.S. the mag is available at my shop in Plush Lambda, out front next to second style and aspire, and at the OMG Magazine offices. ;)
Posted by caLLie cLine at 12:39:00 PM 0 comments

warm up the room with "gLacieR iCe" limited edition gown 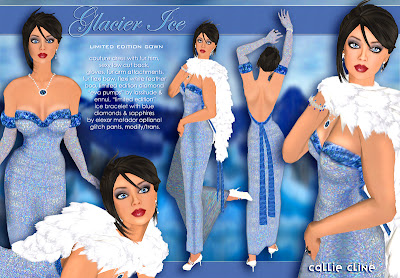 featured on the cover of OMG magazine, which comes out tomorrow, i present:

"GLACIER ICE". it's limited to 50 pieces and will go on sale tommorow morning. it's an elegant and classy gown that looks fantastic on, understated, but still makes a strong impression. classy.

it comes as shown, with these pieces...

it is mod/transfer and comes in a lovely ice crystal with a rotating snowflake inside.
price is $2500. 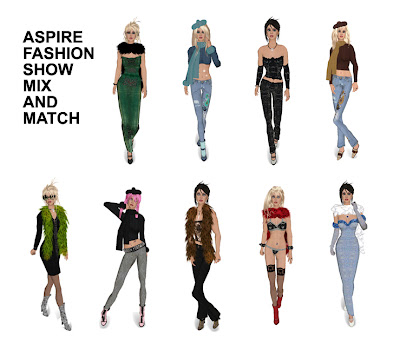 i get asked by my customers all the time about mixing and matching... so when i was asked to do the aspire fashion show, i decided to make my showing a collection of my pieces mixed and matched. it was a lot of fun, and these pics show what i came up with.

besides my limited gown, coming out tomorrow, these are all outfits made up of different pieces.

hope you enjoy! 0h btw, all shoes are lassitude and ennui... 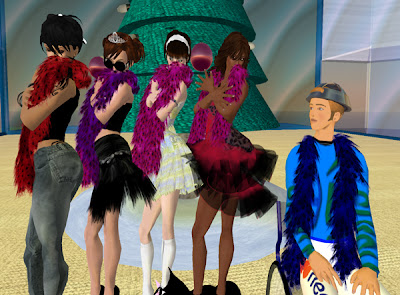 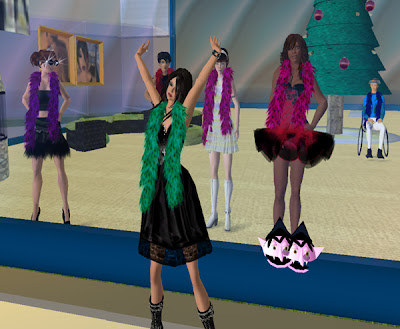 it's with great excitement that i make this announcement. i am embarking on an exciting new venture in conjunction with PONTIAC'S "motorati" sim, and will be doing a brand extension of my "checkered flag girlz" to develop the "motorati girlz"!

this will be a very exciting project and the "motorati girlz" will have a "headquaters" on PONTIAC'S "ride" sim. if you don't know much about the sims, (6 in all) you should really go take a look at it, there's going to be a lot of fun happening there, with clubs, shops, race tracks, drag strips, an amusement park, drive in theater and so much more. it's a sim that celebrates the car culture and with the past, present and future of automobiles, there will be a lot to experience! it's in the building stages now, but you can feel the energy and excitement!

i'll tell you more in the coming days about this, but for now, know that i'll be looking for official "motorati girlz" to appear at events to wave "checkered flags", appear in promotional items, model the "motorati girlz" clothing line, and so, so, so, much more!

i will also be looking for "official" sponsors for the "m girlz" for hair, shoes, and more... so if you're interested in that, give me a hollar! so far we will be partnering with the "ASPIRE" modeling agency for some fun events, we couldn't be more excited to work with their fine team.

so... the fun is about to begin... are you ready girls? cars aren't just for the boys! we're gonna have a great time!

wanna take this ride with me? 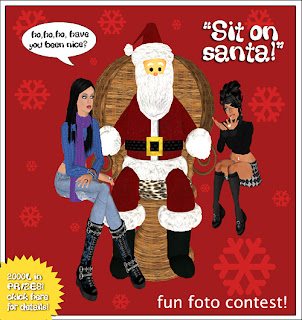 poor old santa is lonely and blue,
his lil ol lap is feelin' cold too,
so come on over and sit on him,
take a pic and you could win!

there are no balls on which to sit,
so you must use your mind and wit,
make your picture cute and fun,
and we'll contact you if you have won!


(the sit on santa contest details are located between callie cline & Kiana Dulce stores in the FUNK plaza in PLUSH LAMBDA. santa is there too, waiting for you! xoxo, caLLie) 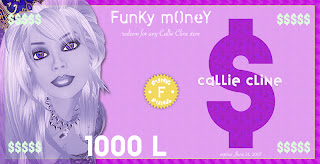 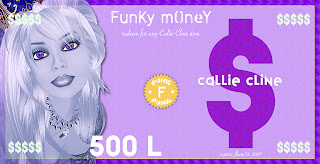 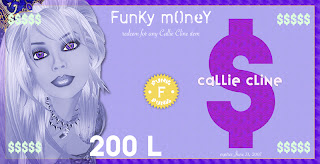 just in time for holiday shopping "fUnKy mOneY" gift cards are now available! sold in denominations of 200L, 500L, & 1000L, these are great for gifts for ANYONE on your shopping list.

redeemable for all caLLie cLine items! spread a little holiday cheer, and give someone "fUnKy mOneY" for the christmas! comes wrapped with a gorgeous bow, and available at "caLLie cLine" at the FUNK square in PLUSH LAMBDA.

here are some ideas of who to buy for: