GRID WIDE GIFT - the "GIVE" tank 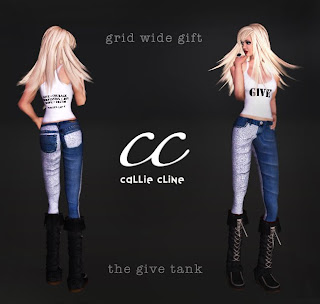 each year i pick a theme for my brand, and while thinking about it over the holidays, the word that kept coming to me was "GIVE".  perhaps it was the realization over christmas that what a needed i already had, and the realization of just how blessed i was. wonderful family, friends, food & shelter, and some very nice "things" collected over the years, and when asked what i wanted for christmas, there was honestly nothing i could think of that i wanted. (quite a difference from when i used to be able to make lists with tons of things)

i passed this shirt out to my group on the 3rd of january with a little message about the theme for this year, "GIVE".

to me it means anything at anytime with any resources we have. time, compassion, truth, love, understanding, service, i never thought of money, until the haiti quake.

so i had made this shirt, and wanted it to be a grid wide free gift as a reminder to "give" a bit this year when ever you can, which whatever you have... and for me a rule is always with "joy". (that can happen even when it's hard too)

anyway enjoy the shirt, tell your friends, it's free for all, and i hope you enjoy it. get it "HERE"

As the Ozimals sim opens today full of fun and surprises, Ozimals, along with Barnesworth Anubis & caLLie cLine announce a new partnership. Anubis and cLine will expand their Benedict & Florentine "pampered pet items" to include a new brand "veLveteen". Under the veLveteen brand, Anubis and cLine will create bunnie-centric items for Ozimals. The line will focus on bunnies homes and living environments.

Ozimals are the next generation of AI breedable pets brought to Second Life by the imaginative minds that brought the the successful Land of Oz to SL with the Magic of Oz sim. Heading up the team are Candy Cerveau and Malkavyn Eldritch. Cerveau and Eldritch have been working on the Ozimal concept and execution for the past several months and first animals Ozimals will offer will be bunnies. "I have always loved bunnies in real life and I thought that they would be a natural choice for a breedable pet because of their many varieties and endearing traits," said Cerveau when explaining the reason for choosing bunnies as the first Ozimal line of pets. "SL is limited by the absence of the tactile but bunnies are universally acknowledged as being soft and cuddly."

"I love bunnies too" says cLine. "After making our first houses for chickens, we heard bunnies were coming and kept that in mind as we were designing. We loved the idea of making things that were fun and a different for 'animal houses', and one day I told Barnes that I wanted to contact the bunnie people."  She found out there were a few doing bunnies, and after speaking to Cerveau and hearing more of the Ozimals vision cLine was sold. "It's not everyday you meet folks who really have the passion and commitment to excellence I saw with the Ozimals team and I was confident we could attach our names and exclusivity to this project as we all really care about what we're making."

Cerveau had this to say about the new partnership, "when Barnesworth and Callie approached us to create an exclusive line of housing for the bunnies, I was thrilled.  Barnesworth is an incredible builder and Callie has some very innovative ideas.  We knew that any products that came out of that partnership would be fantastic." Both parties are excited about this new partnering and excited about working to create the most excellent products for the emerging pet market.

Anubis agrees with cLine's assessment of the new partnership with Ozimals, "I am thrilled to be working on this project with caLLie and Ozimals. Knowing the dedication the Ozimals team has and their attention to every detail gives me confidence about their product and vision" says Anubis. "All of our items are bunnie tested and approved, and caLLie and I are both very excited that they have chosen us for this venture."

Both Annubis and cLine are seasoned Second Life veterans who have created reputations for themselves based on their impressive achievements. Anubis is a well respected master builder who has worked on a host of projects with companies such as  Reuters, Nissan, Bantam Dell and even Linden Labs. Likewise cLine has also worked in SL with RL companies like Pontiac, Leo Burnett, Manpower, in the arena of consulting, branding, content creation and promotions.

The items will be available exclusively on the Ozimals sim in a special Velveteen Garden store and on the So caL sim which is dedicated to "pampered pets" and creative environments and supplies for pets.

Ozimals is produced by the same creative minds that brought Oz to Second Life in a big and inventive way. Heading up the team are the partners behind the successful Magic of Oz sim, Candy Cerveau and Malkavyn Eldritch. The lead scripter is NeoBokrug Elytis, owner of the Wastelands, Second Life's oldest and largest residential Post Apocalyptic community and the principal scripter behind the I Am Legend game in Second Life.

Barnesworth has worked on some of the most impressive builds in SL for companies like Nissan, Rueters, Bantam Dell Publishing, Sundance Channel, STA Travel, Swedish Embassy. His skills allow him to build in all styles and he's worked closely with Linden Labs  improving the mainland. He has maintained a thriving business selling his prefabs, homes and furnishings for 5 years. He's enjoys the creative possibilities in SL and approaches each job with enthusiasm. His iconic avatar is instantly recognizable and he's very proud of the fact he does not have prim hair.

As a fashion designer, model, spokesperson and brand consultant, caLLie and her creations/work have been featured in RL publications from Newsweek to Maxim's Hot 100 for 2007. She is recognized as a ground breaker in digital accomplishments ranging from extensive RL crossover to even being the subject of a credited "class" for a a major university. She consults for various companies and has often been a silent driving force behind many groundbreaking ventures with RL & SL based companies large and small. She has proudly endorsed and worked with Pontiac, Leo Burnett, Manpower, Rezzables and more while maintaining her own brand "caLLie cLine".