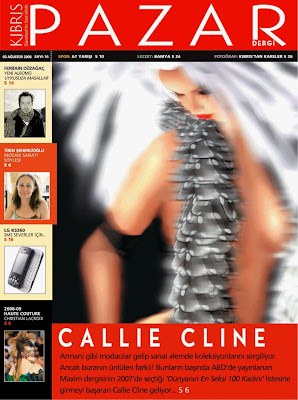 caLLie was in SHOCK this week when the journalist from PAZAR sent her an im, and told her she HAD BEEN PUT ON THE COVER!!! she knew she was going to be inside on the fashion page of this lifestyle magazine, but NEVER did she think she'd be on the COVER.

this was special to caLLie for many reasons... in her words "first of all, the journalist of this magazine was also the one who interviewed for ELLE and MARIE CLAIRE magazines last year. during the interview process, we started to become friends as it was quite a lengthy process. this magazine is from a small island called cyprus and the whole magazine is in turkish which is so cool to me. (Cyprus is just beneath Turkey and is made of two communities Turkish Cypriots and Greek Cypriots)

since meeting her, i have met more turkish people in SL and have found them to be quite lovely people, full of love, life, passion and amazing style. i am constantly humbled and honored about the people i meet in SL, their background, lives and art. it's truly a cool world we are all a part of."

so with that here are the photos... ok, i'll admit the cover is a GREAT thing, but OMG.... THE INSIDE PAGE!!!! has 2 of my favorite designers on it!!!! christian lacroix and dolce & gabana (ok i guess with d&g that's more like 3) but still!!!! how cool is that? i'm almost as excited as caLLie i think. 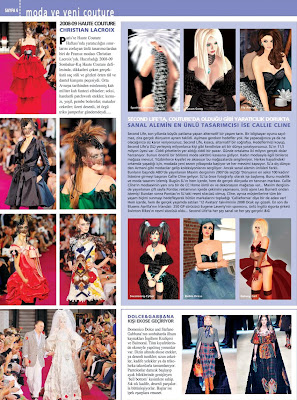 here is what the text says.. the translation:

"Like in Couture, creativity is at its peak in SL. And the most reknown designer in the virtual world is CC"...

"Because of this, famous brands like Armani have opened stores in SL. However SL has its own fashion celebrities. And one of the most important name here is Callie Cline who has been selected in 2007 by RL US magazine Maxim as one of the "100 sexiest women" in the world. CC started off as a photographer then was into modeling. Now has a fashion house and a decoration and home shop. She has also been contracted by Leo Burnett - a leading agency to shoot and style a double pg ad for Pontiac which was printed in the RL Maxim magazine. And after this she was contracted by pontiac as a spokes avatar in SL. Cline also has built and island called Calliefornia where she presents her clients with a whole CC lifestyle. She also been the December beauty for a calendar, sold both inworld and outside, called "12 Avatars". She is now also the spokes avatar of the famous British Insurance company Swinton Bikes who is the sponsor of the famous Irish 250 GP driver Eugene Laverty for Aprilla. Everything in SL is virtual and everything is real..."

thank you to bing :) for this very very sweet surprise... that came at the perfect for caLLie. she even put the pages in her new shop.

(for caLLie who's in a rezzables show now at black swan)
Posted by caLLie cLine at 2:03:00 PM